Learn from the Best: How to Mimic Pixar’s Culture of Innovation 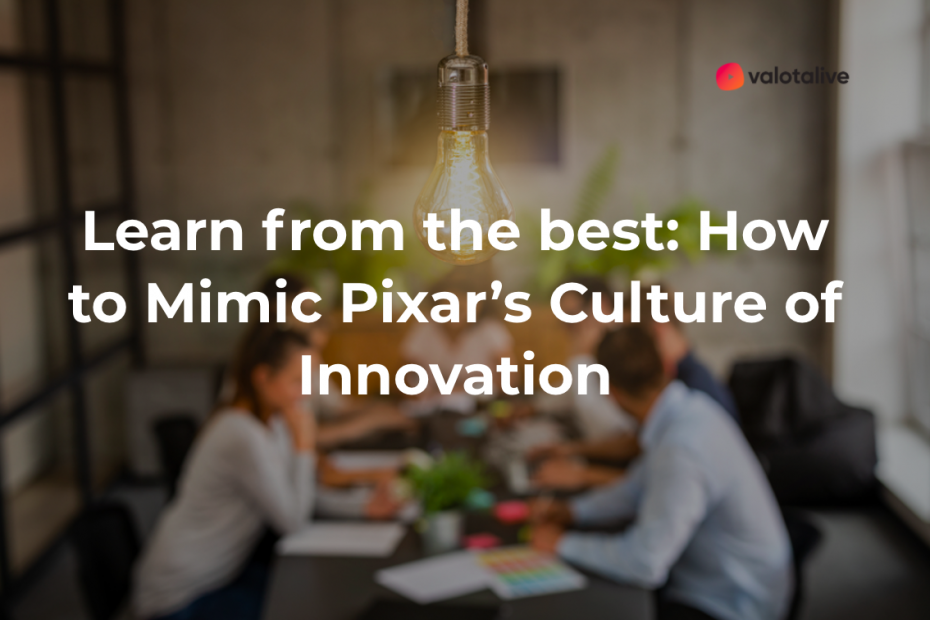 It doesn’t get much more iconic than Pixar.

Since the production company’s inaugural release of Toy Story in 1995, Pixar has yet to produce a box office flop – or even a mediocre film for that matter.

Some of Pixar’s biggest hits – like Toy Story 3 and Finding Dory – have surged past $1 billion in worldwide revenue and their audience reception is second to none.

How? How can a company produce such consistently brilliant work? It’s not only about hiring the best and brightest – nor is it a coincidence.

Pixar’s success comes from creating a company-wide culture of innovation.

How to Create a Culture of creativity and Innovation

A company’s culture either encourages innovation to thrive or hinders it. Which category does yours fall under?

Pixar co-founder and president of Walt Disney Animation Studios, Ed Catmull, recommends everyone get comfortable sharing their unfinished work. It discourages both embarrassment and perfectionism so creativity can flow freely.

Most people dread sharing their in-process creative projects. Doing so exposes our intricate thought process and shortcomings – but that’s also exactly why sharing unfinished work encourages a culture of innovation.

Ed says that Pixar workers don’t have to go through “proper” channels if they wish to communicate with workers in other departments or higher-ups. These strict silos only create tighter barriers that inhibit communication and creativity.

Plus, every decision a person makes throughout the day breaks down cognitive function and energy ever so slightly – also known as decision fatigue. Siloed departments force people to focus on working through proper channels instead of the communication itself.

While creative freedom is useful, too much freedom can paralyze creativity. Instead, Pixar implements specific types of constraints regarding budgets, time, and labor.

These constraints force creativity, similar to how limited ingredients in a kitchen force you to develop new creative meals.

Catmull starts with small groups at Pixar and gives them free creative reign to develop pitch ideas. Once they’ve proved their idea to stakeholders and established confidence in their idea’s potential, constraints come into play to develop the product to completion.

Prioritize Creativity and Flexibility Over Experience

Like Catmull says in his book, mediocre teams will screw up a brilliant idea. Brilliant teams, however, will either take a mediocre idea to new heights or give you back something new and better.

People prefer working with others who share their level of creativity, culture, and innovation. These talents and skills aren’t taught in classrooms or in workplaces.

If you only hire based on experience or education, you’re limiting your team’s creative capability.

Bursts of creativity are great but they’re not the answer to long-term success. You must strategize culture first if you want to build a company consistently centered on innovation for the long haul.

Developing a consistent culture relies on communication. Workers across every department must understand expectations, freedoms, changes, and channels to communicate freely before a united culture can form.

Valotalive’s digital signage helps businesses in 50 countries stay united whether in the office or working from home. Learn how companies like yours are using Valotalive for optimizing internal communications.